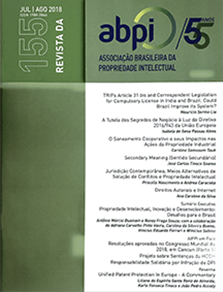 TRIPs Article 31 bis and Correspondent Legislation for Compulsory License in India and Brazil. Could Brazil Improve its System? 3
By Mauricio Serino Lia

The present paper intends to study the international legislation on Compulsory License, specially arriving to article 31 bis of TRIPs Agreement and its legal effects. It will further be studied and compared legislations of India and Brasil, aiming to come to some conclusions regarding possible improvements in the Brazilian Legislation.

This paper has as a reference the Portuguese legal system and it aims to analyze the European Union Directive No. 2016/943, as well as its effects on the international protection of trade secrets, reflecting on the issue of unfair competition. Officially published in the Journal of the European Union on June 15, 2016, EU member states had until June 9, 2018 to perform full transposition of such new document into their domestic legislation. From exhaustion of timeframe for adequacy, this study will analyze innovations brought by the wording, regarding the protection of trade secrets in the territory of European Union, under the scope of the proposal of conceptual harmonization and causes of breach.

From the perspective of the new model established in the Code of Civil Procedure/2015, it will be analyzed the regularization and organization phase set out in article 357, one of the most important examples of dialogue appreciation among procedural subjects, emphasizing its effects on Industrial Property litigation.

“Secondary meaning”: its beginnings, establishment and evolution to encompass the “trade dress” and the “color trademark”. In order to be renowned one must attest its use, advertising investments and that the consumers accepted its name as a “valid trademark”.

The article proposes a conceptual, updated and contextualized revision of the notions of jurisdiction and access to Justice based on the quantitative increase of judicial services offered, and the endless and excessive demands brought to the judiciary system fomented by an uncritical and unrealistic reading of the justice access concept, as well as the use in nBrazil of the alternative means to solve conflicts in the field of Intellectual Property, which were found as very advantageous.

This paper aims to analyze the current mechanisms of copyright protection in the Brazilian internet, starting from the hypothesis that Act no. 12.965/14 did not grant less protection to such rights by being silent about the accountability of those who infringe them and delegate this task to the reform of a law that, four years later, has not yet gone off the paper.